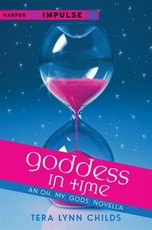 A fun, action-packed novella, perfect for teenage Percy Jackson fans, starring favorite characters from Greek mythology and beloved author Tera Lynn Childss Oh. My. Gods. series. Told from the perspective of Nicole, a popular character in the series, Goddess in Time delves into her pastand how she might be able to change it.The 150-page digital novella has been eagerly anticipated by fans who want to know more about this fun-filled world, and new readers will also find a captivating introduction to Tera Lynn Childs Oh. My. Gods. series, as well as her other Greek mythology-based series, Sweet Venom and Forgive My Fins.As a descendant of Greek gods, Nicole has attended the Academy alongside other students with magical powers on a Greek island. Life is pretty perfectexcept for the fact that she was sentenced to stay there because of a childhood prank that also resulted in her parents banishment. When Nicole discovers a book that teaches the forbidden magic of time travel, she knows she must take a chance to right her wrong. With the help of her friends Troy and Phoebe, Nicole sets off on a quest that will take her from the heights of Mt. Olympus to the ocean

of Poseidons home and to the bowels of Hades. Can she mend her mistakes? And is changing the past, what she really wants? The past and future combine in thrilling, unpredictable waysespecially when Greek gods are involved!Epic Reads Impulse is a digital imprint with new releases each month.