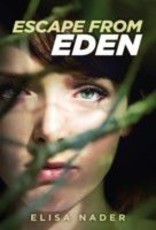 Since the age of ten, Mia has rebelled against the iron fist of a fundamentalist preacher who lured her mother away to join a fanatical family of followers. At "Edenton," a supposed Garden of Eden deep in the South American jungle, everyone follows the reverend's strict and arbitrary rules--even about whom they can marry. Mia dreams of slipping away from the armed guards who keep the faithful in and the curious out. When the rebellious Gabe, a new boy, arrives with his family, Mia sees her chance to escape and to free her family. But the scandalous secrets the two discover beyond the compound's facade are more shocking than anything they imagined. While Gabe has his own terrible secrets, he and Mia bond together, more than friend and freedom fighters. But there's no time to think about love as they race against time to stop the reverend's paranoid plan to free his flock--but not himself--from this corrupt world. Can two kids crush a criminal mastermind? And who will die in the fight to save the ones they love from a madman whose only concern is his own secrets?