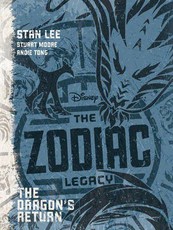 Follow Steven Lee's story in Disney The Zodiac Legacy: The Dragon's Return, the second novel in the Disney The Zodiac Legacy series. Twelve magical superpowers. One sinister conspiracy. One unlikely hero. One year after receiving the power of the Zodiac, Steven Lee and his teammates have started to master their abilities. But when his team seems to be falling apart, Steven has to find a way to be a leader, before there isn't a team to lead anymore! The power-mad Maxwell and his Vanguard have returned and are planning their next move! However, they are not the only threat that Steven will have to face. With allegiances shifting around him and the line between good guys and bad guys blurring, Steven must figure out whom he can really trust, before it's too late! Follow what happened after Disney's The Zodiac Legacy: Convergence with the second novel in the series, The Dragon's Return. This action-packed book is written by Stan Lee, Stuart Moore and illustrated by Andie Tong. This book also includes a Q & A section with writer Stan Lee.