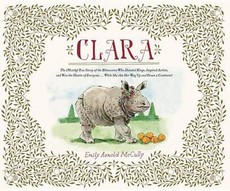 Clara: The (Mostly) True Story of the Rhinoceros Who Dazzled Kings, Inspired Artists, and Won the Hearts of Everyone . . . Wh

"A rhinoceros tours Europe in the mid-18th century and becomes a sensation--based on a true story"-- This fascinating, informative, and touching picture book by a Caldecott Medalist is based on the true story of an eighteenth-century rhino who toured Europe and started a sensation! Clara is a book sure to fascinate young animal lovers, history buffs in the making, and kids interested in geography, as they follow a rhinoceros on her journey across Europe. In detailed illustrations, McCully shows Clara being introduced to Louis XV of France, Frederick the Great of Germany, and others willing to pay for a chance to stroke her soft lip. Her owner, a Dutch sea captain, keeps Clara fed (she eats 100 pounds of hay and 30 loaves of bread a day!) and watered (she drinks 14 buckets of water and beer) and takes loving care of her until her death 17 years later.