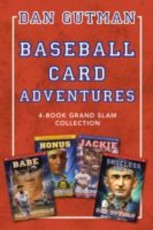 Twelve-year-old Joe Stoshack is an average kid with two amazing talents: getting his hands on rare baseball cards, and traveling through time to meet the famous players they depict. Sports buffs and fans of authors like Tim Green and Jon Scieszka will love this imaginative series.Together for the first time, this collection includes: Honus Me, featuring Honus Wagner, the greatest shortstop ever, from the turn of the century. Honus Wagners baseball card is the rarest and most expensive of all; one specimen sold for $2.8 million in 2007. Jackie Me, featuring Jackie Robinson, the first African-American player in Major League Baseball, six-time All-Star, and recipient of the Presidential Medal of Freedom and the Congressional Gold Medal. Babe Me, featuring Babe Ruth, all-time great batter and seven-time World Series champion, who set records that still stand today. Shoeless Joe Me, featuring Shoeless Joe Jackson, who was banned from baseball in the prime of his career and whose involvement in the Black Sox Scandal is still disputed.