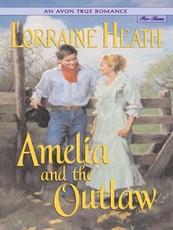 AmeliaWith a strict, eagle-eyed judge for a father and two older brothers to back him up, Amelia Harper is doted upon and protected within an inch of her life. She's not even allowed to have a sweetheart until she's seventeen, for example. Amelia longs for the day she can do as she pleases, but that day doesn't seem to be in any hurry to arrive.The OutlawFor a young fellow, Jesse Lawton has a surprisingly shady background. The only wonder is that it took him until the age of fourteen to end up in jail, so wild was the path he'd been on. But five years have passed, and his luck finally seems to have turned: he's been freed. If only he can stay on the straight and narrow . . .When Jesse arrives at the Harper ranch to work off the remainder of his sentence, it's no surprise that the judge's pretty daughter catches his eye. What he doesn't know is that this young lady is itching for excitement, and with one look into his haunted eyes, Amelia knows she's found it in Jesse. Without meaning to, Amelia forces the erstwhile outlaw into a choice between his freedom and his