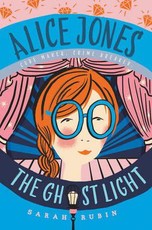 Five days before opening night at refurbished old theatre the Beryl, ghostly activity unnerves the cast. Alice's detective skills are secretly enlisted. But as she digs into the Beryl's past, she discovers an unexpected mystery with a stolen diamond at its heart ... Old refurbished theatre, the Beryl, is re-opening. Days before opening night, the ghost light - left on at night to appease the ghosts of actors - is extinguished. Alice digs into the Beryl's past, sleuthing in a network of dark backstage corridors and cobwebby storage rooms. Gradually, she starts to uncover the hundred-year-old secret of the theatre: a stolen diamond. Is the Beryl haunted by a ghost - or a living thief?