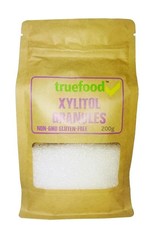 View Offer >
Product Information
Truefood Xylitol Granules
- 200g. Truefood Xylitol granules are a natural alternative to table sugar, found in fibrous vegetables and fruit, corn cobs and some hardwood trees like Birch, it is categorised as a Sugar alcohol (Polyalcohol). Unlike table sugar Xylitol is beneficial to the body, it aids in tooth regeneration and cavity prevention as well as stabilise insulin and hormone levels. First discovered in 1891 by a German chemist, Xylitol was re-discovered during World War II, by the Finnish who were suffering from sugar shortages and looking for a viable alternative. Conveniently Finland has dense forest areas with Birch trees and with the discovery that Xylitol can metabolise without insulin, the alternative was well received. Since the 1960s Xylitol continues to be used as a sugar alternative for diabetics and those with impaired glucose tolerance or insulin resistance. Xylitol is a five-carbon sugar, this means that it is antimicrobial and can prevent the growth of bacteria. Unhealthy bacteria in the mouth has shown to increase cavities and periodontal diseases like gingivitis so contrary to table sugar, Xylitol aids teeth and the regeneration of gums. It is so beneficial for teeth that when used before bedtime and after brushing and

flossing, the sugar will heal your gums and teeth as you sleep. Xylitol's anti-bacterial properties that can prevent middle-ear infection in children, it does this by blocking bacteria from attaching to cells within the body. Studies have also shown that Xylitol is beneficial to bone health with scientists speculating that this is a result of Xylitol aiding in calcium absorption within the intestine. A natural insulin stabiliser, Xylitol assists with the body's immune system and protects against degenerative diseases, further to being anti-aging. Warning:
- Daily consumption of more than 25g of Xylitol may cause diarrhoea, which stops when use is discontinued
- Toxic for dogs, even in small amounts Specifications:
- Dimensions: 120mm x 140mm x 40mm
- Capacity: 200g
- Warranty: Non-Returnable