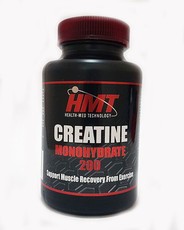 View Offer >
Product Information
Creatine Monohydrate 200g A Brief Overview Contains 5000mg Creatine Monohydrate per teaspoon. Creatine is bodybuilding's ultimate supplement, and for good reason. For one thing, creatine can significantly increase lean muscle mass in just two weeks. It is also responsible for improving performance in high-intensity exercise, increasing energy levels, and speeding up recovery rates. It's no wonder athletes who use it have such of an edge over those who do not. Soon nearly every athlete who competes will use it (if they don't already). Creatine's ability to enhance energy reserves in muscles comes from its muscle protein synthesizing action, while minimizing protein breakdown. This occurs because creatine has the awesome effect of super-hydrating muscle cells with water. It enhances muscles' growth too-making muscle fibers bigger and stronger. Quite a few studies have been done on creatine to figure out why and how it works so well. There have been over twenty double blind (meaning neither the researchers nor the subjects knew who was getting what), placebo-controlled studies conducted on creatine in the past five years. They proved that creatine increased energy levels, resulting in increased strength, endurance levels, and recovery rates. Another unexpected benefit attributed to creatine was discovered as well: